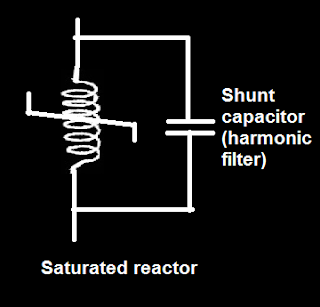 •Saturated reactor is use for controlling reactive power.

•It consists of reactor and shunt capacitor bank.

•It is like a magnetic switch which control current during each half cycle.

•It is also called tapped reactor and it is single phase.

•It have multiple taps for varying the inductance according to requirements of loads.

•When it get saturated further increase in current will not cause increase in magnetic flux and when it become saturated the reactor (inductor) losses its inductance property and hence decrease in inductive reactance will allow increase in AC current flow.

•This can be controlled directly or remotely.

•Controlling winding consists of DC and it is separated from AC power.

•The advantage of Saturated reactor is it low maintenance and performance at high temperature.

•Saturated reactor is a magnetic amplifier.

•The disadvantage of saturated reactor is its slow response.