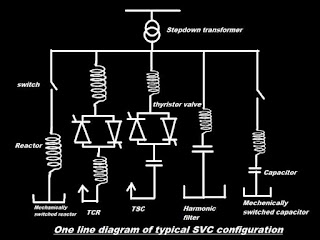 •SVC have two modes one is inductive mode and second is capacitive mode.

•SVC are use for regulating transmission voltage and for improving power quality of industrial load.

•SVC is made from one or more banks of switched or fixed capacitor or reactor and thyristor controlled valve.

•SVC is connected in parallel with transmission line.

•SVC have no rotating part except internal switchgear.

•SVC is installed at the line ends or at the midpoint transmission system.

•SVC is similar to asynchronous condenser but with no rotating parts.

•The susceptance of SVC is controlled by thyristor valve.

•SVC is use to bring the power factor closer to unity.

•SVC gives instantaneous response to changes in the system.

•SVC is also use for improving transient stability and dampen power swings  and reduce system losses of the system.

•Power system have three states one is steady state second is dynamic state and third is transient state.

•Transient stability is the ability of system to maintain in synchronism when subjected to disturbance.

•Disturbances like sudden change in load or switching or any fault. Since shunt compensation increase the transmittable power.